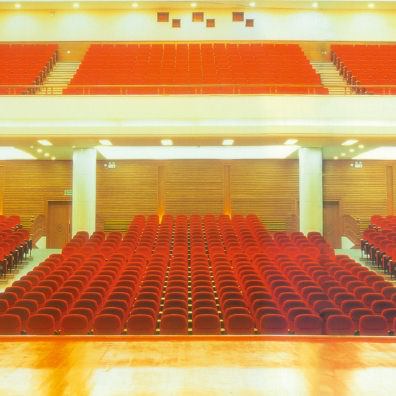 Welcome to the web site of RATCO – the furniture factory.

The company was launched in 2007. The main activities of RATCO include production and sales of the furniture, design of office and public premises, including theater, conference and cinema halls, airport terminals, hospitals.

By 2009 RATCO became a dealer in Russia of the majority of domestic and foreign armchair producing factories.

In September 2011 we launched production of own seats for halls and waiting areas under the Ratco-Caranti brand. We set the production in Obninsk on the premises of 625 sq m, using the components imported from PRC.

By January 2012 we have increased the production capacity and stock of components in order to produce and ship of up to 300 seat/week of any color and configuration.

In 2013 we accepted the 100% import replacement program and purchased equipment for the production of spare parts:

In 2014 we acquired our first experience of cooperation in the framework of the Customs Union, having equipped conference-hall of the National Center of Biotechnology in Astana, Kazakhstan.

In April, 2015 we have planned to start a new line in Russia with the Uniblock technology, which is innovative for the segment, has no analogues in CIS and which production capacity is of 2000 units / months. However, on March 2015 the fire destroyed rented factory premises. We lost assembly hall, equipment and the accessories warehouse.

Nevertheless, on July 14, 2015 we continued to work on the new production area of 840 m. sq. we bought and launched the new equipment for armchair production, completed the restoration of molding equipment.

In January 2016, we launched production line using the Uniblock technology in Foshan, China, that was oriented to the South Asian markets.

Robustino chairs are made using new technologies that are not used by any other factory in the domestic market, CIS, TC, BW or Southeast Asia markets.

Since 100% of our production is in Russia, from raw materials to finished products, we are able to fix our prices in rubles, which do not depend upon the world currency fluctuations, whereas the European quality standards allow us to penetrate even the foreign markets (ISO9001-2011, ISO 9001-2008).

We work with both commercial and non-commercial organizations and always open to dialogue. We would be glad to offer our professional advice regarding the masterplanning, placing and installation of the seats. Our managers will provide up to three options for seats placement in the hall, out of which you will be able to choose the most appropriate to your preferences and needs.

We could either install the seats in your premises; however this work requires separate negotiation and billing, or we could provide your staff with the detailed instructions with photos on how to carry out the installation.

We ship our product as a cargo via transport companies, or by private transport in the regions of the Customs Union (Russia, Kazakhstan, Belarus). The nearest terminal is served by TC “Business Line”.

We would be glad to welcome you at our showroom, where you could appreciate the production of our company by yourself.